….someone like you cares a whole awful lot, nothing is going to get better, it’s not.
Dr. Seuss from The Lorax

The Lorax has to be one of our favourite Dr. Seuss books (there are many that we love).  It is a tale of greed, non-sustainability, and lack of concern for our environment, with the beautiful lilting rhymes that Dr. Seuss can do (and it doesn’t have tooooo many made up words that an make some of his books a hard read).  So I guess it was inevitable that when we saw a bolt of Lorax fabric a couple of months ago, Mr. 3 snatched it up and took it to the counter for cutting.   He was adamant that I make him a hat out of it, and it had to have the Lorax fabric on the outside AND inside.

I made the boy a hat…almost to his specifications.  There is a contrasting fabric inside but not on the brim.  I also made him a matching backpack for kinder (preschool), because his old backpack is too small to fit all the things he needs to take.  I was rewarded with huge smiles when I unveiled the hat and backpack, and they had to be tested out immediately.  In fact, they have barely been off him, and he has been practicing putting his lunch in it using the wooden and felt foods that the kids have.

We took some photos in our overgrown garden with the tomatoes we had picked that day.  Don’t ask me why some of the poses were necessary, I was just told to photograph them.  There seems to be some excitement about starting kinder now, whereas until now I think he has been a little scared.  0nly a few days to go.

If you would like me to make you a preschool backpack, please email me (christine@wispythreads.com.au) to discuss options. I have several things on the go at the moment and probably won’t be making any more in the near future unless someone wants one….or my younger son demands his own. 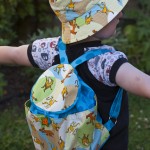 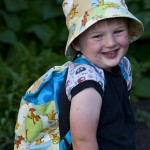 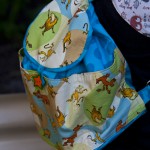 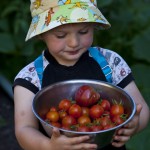 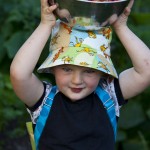 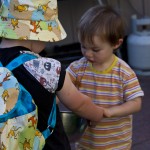