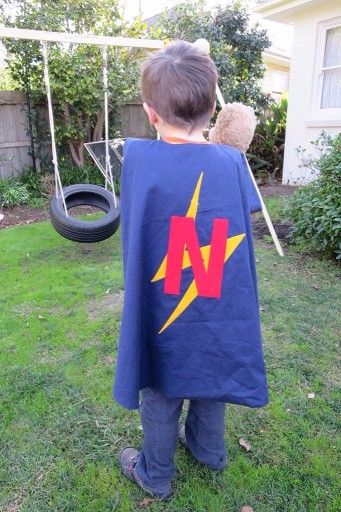 Superheros are big in our house at the moment. They aren’t something that have been touched on much until recently. Master 6 (Nathan) watched the Incredibles for the first time a few months ago, and he’s totally hooked. He has been bringing home Spiderman and Star Wars books from the school library, and now all the plush toys in the house now wear paper masks and capes. I decided it was time to do something about enormous amount of sticky tape that was being used to stick their paper superhero costumes together and also stick them to the toys, and in the process ensure I have sticky tape available for when it’s needed.

I started with capes for the teddy bears. It took a couple of goes but I finally got a pattern shape that looked ok. Once both bears had superhero capes I moved onto making bigger ones for the boys. Nathan was very excited that we were going to make him a superhero cape. I took some measurements, made a pattern that resembled the one that I liked for the bears, and started on a kid-sized cape. Nathan decided he wanted a big ‘N’ on the back with a lightening bolt, so we found some felt to make those from. One of my sewing machines is able to be used without the foot pedal. There is a button on the front of the machine that will make it start and stop, and the speed can also be adjusted from the front of the machine. So, with the machine set to a slow sewing speed, and with me hovering over his shoulder making sure that everything was done safely, Nathan threaded the machine and sewed on his lightening bolt. He was so very proud of his achievement.

Even though The Incredibles highly recommend ‘NO CAPES’, we are now a caped household but hopefully I will be able to find some paper and sticky tape next time I need them. The boys aren’t quite happy yet though. They tell me the next job is….masks.