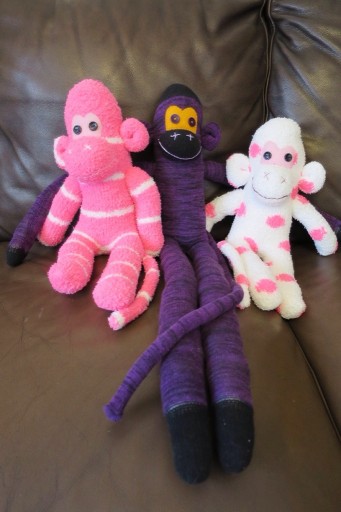 It’s the school holidays and I thought that making sock monkeys would be a nice little project that we could do together. I found a great tutorial here to follow. If you’re keen, there is a fantastic Sock Lion tutorial on the site as well.

Our first step was to buy a pair of socks. Of course the two boys couldn’t decide on just one pair. Thankfully we culled down the socks that were chosen to a double pack for Nathan (6-years-old) and one pair for Toby (4-years-old). Nathan insisted on socks that didn’t have contrasting toe and heel colours. I didn’t read the packet that Toby’s socks came in and so it wasn’t until we got home and opened it up that I realised we had bought a knee-high pair of socks. Toby wouldn’t let me cut the sock to a shorter height, so his monkey has since been dubbed ‘Long Legs’.

We started with great enthusiasm. We made three sock-monkey bodies, Nathan turned the bodies the right side out and we stuffed them. Both kids got the hang of stuffing them quickly, though the legs did end up lumpy because they didn’t rip up the stuffing into small enough pieces. Then I hand sewed the stuffing holes shut.

We moved onto making the other body parts from the second sock of the pairs. Again Nathan was able to turn the parts out the right way and the kids stuffed the arms. Then came a lot of hand sewing. I sewed the arms shut, I sewed the ears shut, we cut the batting for the tail but it was too fiddly for Nathan to turn the tail out the right way. The tail was sewn shut. The kids chose felt and buttons to use for the monkey’s eyes, and Nathan did help to sew the buttons on, but all the rest of the stitching fell to me. I sewed on the felt eyes, the mouth, the ears, the arms and the tail. Finally all that was left was the stitching along the mouth.

So, after working on our project for several days I have realised that this it was just too advanced for my kids, even for the 6-year-old child. Yes, they had fun stuffing the body parts, but it really didn’t take long before they told me they were bored with it (there was a lot of stuffing to be done for three monkeys). And with all the hand stitching that was required there was just no way that the boys could be included. I still think this is a great school holiday project, but I’d recommend doing it with older children. The end result, though, are some very cute sock monkeys that the kids love. One of the three will be given to a little friend who became a big sister a couple of days ago, and the kids are really exited to be able to give her something they helped to make.