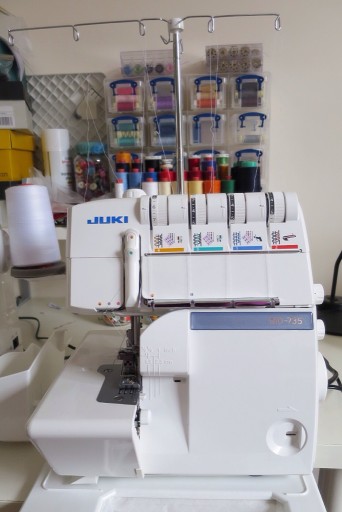 My lovely husband has been instrumental in the progression of my sewing from the very basic to much more professional finishes. Many years ago, when I had but one sewing machine to my name (which was a 20+ year old Janome), I had no idea that I needed an overlocker. I was churning out modern cloth nappies at the time and zig-zagging the edges of my bamboo fleece soakers. They had very wavy edges, but that didn’t matter since they were just for my own use (well, my own baby’s use). Andrew then gave me an overlocker for my birthday, and when I first saw it I wondered what I needed one for. But it was fantastic! It wasn’t long before I was sewing all sorts of clothes for my baby (I only had one then) and even the world of knit fabrics became accessible to me (I’d never had success with them before).

A couple of years ago, after listening to my complaints about the use of a double needle to finish hems on knit fabrics just once too often, Andrew bought me another sewing-related gift. It was another birthday, and another big box found me very excited about my first Coverstitch machine. It was, however, a joy that was short lived. In the years that followed I occasionally tried different adjustments, needles, threads, fabrics and fabric stabilisers. The machine was acceptable for personal use, but I found it wasn’t reliable and definitely not good enough to use it on items for sale. In particular I had issues going over seams. A search online found that my machine was known to be difficult and there were forums that you can trawl through for ideas on how to make the machine perform at its best. I made a few items for my shop, but I wasn’t happy with the result and slowly the machine was used less and less, and my knit fabrics rarely saw the light any more. I understand that industrial coverstitch machines are renowned for needing a lot of tweaking to get right, and once right then they aren’t changed until the entire run of garments is done. But, to my way of thinking, a domestic machine shouldn’t be so difficult.

Earlier this year I sold my Coverstitch machine and told Andrew that I would put the funds towards a new one. I had found one that interested me, and though I hadn’t tested it yet I was pretty sure it was going to be much better than the old one. It also converted to an overlocker. Two overlockers would suit me well so I could have light coloured threads in one and dark in the other and that would save me a lot of time spent in rethreading my single machine (though I haven’t yet worked out how to fit two overlockers into my sewing space). We also sold some items on Ebay and I had saved about half the money I needed for the new machine when I was presented with a box on Mother’s Day this year. I was told it was a combined Mother’s Day and Birthday present. I was so excited to see the machine that I had been lusting after, though I had a small fear that it wouldn’t live up to expectation since I hadn’t tested it with any of my fabrics that had been a problem for the old machine.

The new machine was set up for overlocking when I took it out of the box, and it really does overlock beautifully. Compared to my old overlocker it is so quiet! My birthday was just a few days ago, and I finally got around to trying it on the Coverstitch setting. I first had trouble with it skipping stitches, but then I changed the needles and found it sews like a dream. I can hardly believe how easy it is…this machine shows how Coverstitch sewing on a domestic machine should be! Not a struggle like the old one but something that works with just a few adjustments for the fabric used. I’m so very pleased with it (so far).

In the last couple of days I have made myself a new top and I delved into my stash of lovely European knit fabrics and made my 6-year-old son a racing car t-shirt which he loves (the 4-year-old is, as I write this, demanding one for himself). My sewing room now sports three Juki machines. I’m becoming quite impressed with Juki, a brand very well known in the industrial sewing world but not known until relatively recently in the world of domestic machines. I just hope this one lives up to its promising beginning.